Tank and I have been busy writing and doing a bit of reading. Here is what we are doing this month.

We are listening to Penny Reid's Knitting in the City series. I'm downloading them from my local library through the Hoopla app. It's awesome. See if your library has it. 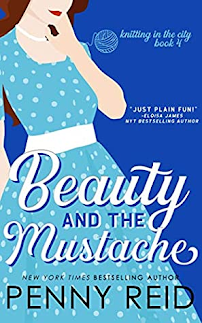 There are three things you need to know about Ashley Winston: 1) She has six brothers and they all have beards, 2) She is a reader, and 3) She knows how to knit.

Former beauty queen, Ashley Winston’s preferred coping strategy is escapism. She escaped her Tennessee small town, loathsome father, and six brothers eight years ago. Now she escapes life daily via her one-click addiction. However, when a family tragedy forces her to return home, Ashley can’t escape the notice of Drew Runous—local Game Warden, bear wrestler, philosopher, and everyone’s favorite guy. Drew’s irksome philosophizing in particular makes Ashley want to run for the skyscrapers, especially since he can’t seem to keep his exasperating opinions— or his soulful poetry, steadfast support, and delightful hands— to himself.

Pretty soon the girl who wanted nothing more than the escape of the big city finds she’s lost her heart in small town Tennessee.

Beauty and the Mustache is book #4 in the Knitting in the City series, and book #0.5 in the Winston Brothers series. Each book is a standalone, full length (110k words), contemporary romantic comedy novel, and follows the misadventures and exploits of seven friends in Chicago, all members of the same knitting group.

Find it on Goodreads!

We are also slowly making our way through Diana Gabaldon's Outlander. My kindle is dying a slow and painful death so I can only read it when it is charged. I'm only about a quarter of the way in, but I loved the TV show. I hope the book is even better 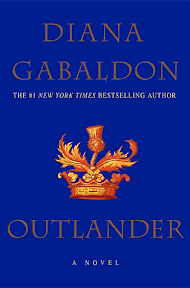 The year is 1945. Claire Randall, a former combat nurse, is just back from the war and reunited with her husband on a second honeymoon when she walks through a standing stone in one of the ancient circles that dot the British Isles. Suddenly she is a Sassenach—an “outlander”—in a Scotland torn by war and raiding border clans in the year of Our Lord...1743.Hurled back in time by forces she cannot understand, Claire is catapulted into the intrigues of lairds and spies that may threaten her life, and shatter her heart. For here James Fraser, a gallant young Scots warrior, shows her a love so absolute that Claire becomes a woman torn between fidelity and desire—and between two vastly different men in two irreconcilable lives.

Find it on Goodreads!

Then for cuteness sake, here's a baby picture of Tank! What are you reading? Have you read either one of these? 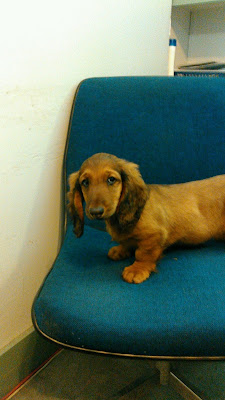