Book Review: Anything for You by Jessie Gussman 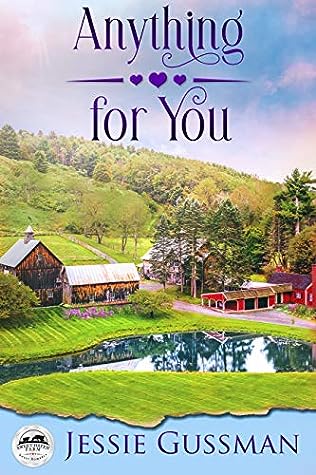 After the circus she works for goes bankrupt, Jillian Powell takes advantage of a dubious family connection.

The little farm in Pennsylvania that belongs to her “cousin” is a safe haven for Jillian, and she’s sure no one will ever uncover the incriminating truth she’s hiding…

…until an elephant shows up on her doorstep.

By-the-book animal control officer, McKoy Rodning, is thrown for a loop when an elephant crashes his best friend’s wedding.

He’s even more confused when the exotic Jillian evades all of his questions about permits and regulations. All he knows for sure is that she’s emphatic about reuniting the depressed animal with her elephant sister.

McCoy finds himself uncharacteristically bending the rules to help Jillian, risking both his job and upcoming promotion. When her secret is exposed, he's faced with following the rules or following his heart.

Jessie Gussman is one of my favorite sweet and clean writers. I always feel better after reading one of her stories and I almost always fall in love with the characters.

I picked this story to read as an ARC for City Owl Press. They seem like a pretty cool group of authors and publishers.

Anyway, I chose this story to read because of the blurb. I love elephants and I think it would be really cool to be an elephant trainer, and I also love the circus. My grandparents would take my brothers and I to Baraboo, WI to see the Ringling Brothers when their circus came home. I was excited to read about an elephant trainer finding love. The story itself was good. It did have a tendency to be a little slow in the first half that I almost set it down, but then it picked up steam after the 60% mark. Jillian had smuggled her way into the States where she found a place to open a boarding kennel; while, McKoy was the animal control officer in town. She had to overcome her distrust of authority figures; even though, he had been a complete gentleman the whole time. He had abandonment issues and never thought himself interesting enough to catch a girl like Jillian. But this is a romance, so we all know how it ends. Without giving the story away, there were enough plot twists and surprises thrown in once you got halfway through the book to keep me turning the pages.

I would say that usually Jessie has an underlying theme in her stories, and some are more subtle than others. The struggles of people trying to get into the States for a better life was front and center throughout the story. It lent a heavier feel to the book than what she normally has.

Overall, this was a good story. It is very different than her ranchers in North Dakota as it's tone is not as carefree and happy as they are. I did enjoy it and can't wait to read the rest in this series.