Book Review: Cowboys Don't Have a Marriage of Convenience

Cowboys Don’t Have a Marriage of Convenience 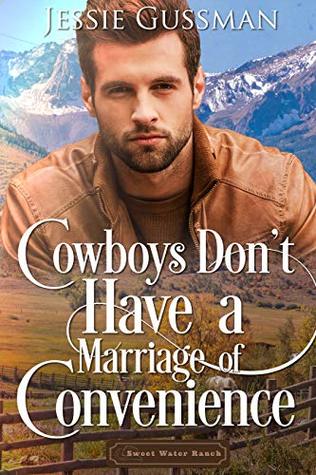 Book Blurb from Goodreads:
It was supposed to be simple. Marry the tall Texan. Her children get a father. They save the ranch. A business transaction, nothing more. She definitely wasn’t going to fall in love. After her husband ran off with her little sister, she was no longer susceptible to cowboy charm. Except, the North Dakota girl had never met a Texas cowboy. He married her for the ranch. A former champion bull rider needs a spread to call home, even if it is in North Dakota. Even if it comes with four little kids. And a big, black, slobbering dog. Especially if it comes with a woman with enough sweetness and enough toughness to rope his heart and heal it. The cowboy’s not afraid of anything…except losing his heart again. Books in the Sweet Water Ranch Billionaire Cowboy series: 1. Cowboys Don’t Marry Their Best Friend 2. Cowboys Don’t Have a Secret Baby 3. Cowboys Don’t Marry the Beauty 4. Cowboys Don’t Have a Fake Marriage With Their Best Friend’s Sister 5. Cowboys Don't Have a Marriage of Convenience 6. Cowboys Don't Believe in Fairy Tales 7. Cowboys Don't Have a Secret Romance

Book Review:
I really enjoy Jessie Gussman’s stories, but this one is my favorite so far.

Elaine was such a strong woman. Her husband left her for her sister. How awful! She is left to care for a handful of small children and a rundown ranch in North Dakota. She doesn’t complain and does the best she can. She is about to inherit one billion dollars as long as she gets married.

Rem is championship bull rider who left Texas when his life exploded. He moves to North Dakota for the promise of a ranch and a billion dollars. I just love marriage of convenience stories. It is so fun to see how the characters are forced to be together. And then they try not to fall in love with each other.

The characters are likeable and strong independently. Together the chemistry flies off the page. Elaine’s children are just adorable.

If you like sweet hot cowboys and strong independent women, this is a good one.
- January 22, 2020