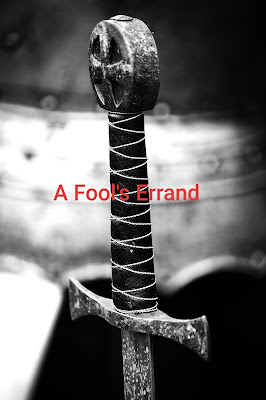 The town surrounding the castle lay still as everyone hid indoors from the heat of the midday sun. A young boy slunk in the shadows, keeping out of sight of the guards on the tall wall surrounding the city. He ran down a narrow alley, dodging potholes and filth. The pungent scent of waste and decay assaulted his senses until he scampered onto the main road. The one guard near him was checking out a noise in the other direction. The boy flew through the gate and over the drawbridge. Finally, he breathed freely.


He slid the scroll he stole into his pack before taking off at a full run into the menacing woods. The trees stood tall, blocking the sunlight. His feet trod over decaying leaves and pine needles as he picked his way to the meeting point.


“Boy,” a voice whispered out of the darkness. “Did you get the map?”


The boy slowed to a stop, glancing around him. “Lord Bryn?” He stepped further into a lonely sunbeam that broke through the canopy of the trees.


Lord Bryn strolled out from his hiding place behind a tall pine tree. He swept his traveling cloak back to reveal his red satin shirt and trousers.


“Let me see the scroll.” He extended his jewel encrusted fingers as the boy dug into his pack. A rolled sheet of ancient papyrus was clutched in the boy’s fist. Lord Bryn yanked it from the boy. “Excellent. This will do.”


The scroll unrolled to show vibrant reds and blues traversing across the parchment. All of the lines ended a large black X. Lord Bryn handed the boy a silver coin and pocketed the scroll. He turned on his heel and struck out into the woods.


“What are we looking for?” The boy shrieked as he hurried to keep up, earning a dark look from Lord Bryn.


“It is a map to the most powerful sword in the realm. With this sword, I would rule any kingdom I want.” An evil laugh erupted from him, silencing the noise in the wood. “It’s called the Ebonari Sword. Legend says it is guarded by a fierce being. Now, stop dawdling if you want to come. Otherwise, go back to your mother.” He waved his hand at the boy.


“I’d rather come with you, sir. My mother is dead, and I have nowhere to go.” His voice wavered with the emotions warring in him.


The scroll led them through hills and dales, over mountains and across the plains. They traveled for four days and four nights in total silence. They reached a large boulder on the edge of a vast, grassy expanse. A large X was carved into the top of the rock.


“That just can’t be.” Lord Bryn studied the map and searched the open field. “The sword has to be here.”


Up ahead, the boy’s voice called back to him. “Sir, look!” He pointed to something just over the crest. Lord Bryn jogged over to him. In the distance, stood a moss covered turnet with a small stone door at ground level. A row of clerestories sat a foot below the roofline. They crept towards the stone building.


The boy approached the stone door. Wild roses grew on either side of the doorway.


“Ouch!” A thorn stuck into his thumb. A poisonous green liquid oozed from the broken thorn and spread throughout his body. Tears formed in his eyes as the blood ran down his thumb.


“It’s just blood. Wipe it off and keep cutting.” Lord Bryn handed him a large knife to swipe at the brambles and roses. He reached for the knife but dropped it as soon as the silver handle touched his skin. At once a large, putrid green blister appeared where he touched the knife. The tears flowed faster.


“It hurts so much.” He whimpered, folding his hands into his tunic, one blistering, the other still bleeding.


“You’re not much use to me.” Lord Bryn spat as he pushed the boy to the ground. “I will do this myself.”


He covered every inch of his body with rags and started to hack at the offending brush. For every piece he cut off, another appeared. Eventually, he made his way to the door as the brambles and roses filled in behind him.


“Fuzzy peaches,” he cursed. “I’ll worry about that later.” He shoved his shoulder into the small stone door. It heaved inward. The inside of the turnet was dark and damp. Spiderwebs and cockroaches covered the place.


“Hrumpf. That must be the fierce protector.” He kicked a skeleton of a knight as he walked passed. “Shouldn’t be too hard, now.”


He mounted the stairs at a slow pace. The old wooden steps complained at his every step until he made it to the top. Here was another stone door with a glorious pink light shining from under it. Lord Bryn placed his shouldre against it. The door was warm and vibrating.


“How curious.” He mumbled to himself. “Here it goes.” He shoved all of his weight into the door, but it disappeared. His massive frame tumbled into a round room with windows encircling it.


“What the-” He shook his head to clear the rining in his ears. In the middle of the room, stood a woman with a pink glow around her. Her red locks swept up as if she stood in a gentle breeze. She was leaning on the hilt of a large black sword.


“Lord Bryn, I have been watching your travels.” Disdain colored her singsong voice. “My roses are not appreciative of what you did to the. Butchered them to get to the door while leaving your poor boy bleeding and blistering from the poison on my lawn.” She swung up the large sword and stalked towards him. “Then, kicking my skeleton, Thomas. Isn’t bad enough he is already dead? ‘Why’ one may ask?” She circled him like a cat hunting its prey.


“I seek the Ebonari Sword to rule the kingdoms.” He stumbled to his hands and knees.


“Do you think that you would be a fair king to the people?”


He nodded as he clambered to his feet, never taking his eyes off of the strange woman.


“Liar!” The wind started to whip around the room. She leapt at him and swung the giant Ebonari Sword at him. He raised his silver hunting knife. The sword cut right through it and plunged into his chest. He coughed blood and fell to his knees. She yanked on his hair to lock his eyes with hers. “You failed.”


She leaned closer as he coughed up blood. The blood migrated to the sword, where it glowed a crimson red as the life dimmed out of Lord Bryn’s eyes. The woman cackled and threw his body out of the window.


Where he landed a beautiful rose bush grew.

With lots of love~