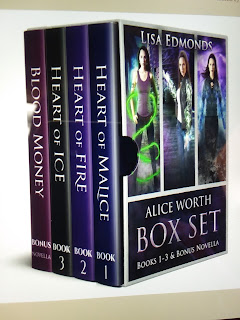 HEART OF MALICE (Book 1)
The first time Moses Murphy’s granddaughter killed on his orders, she was six years old.

For twenty years, she was a prisoner of an organized crime syndicate, forced to use her magic to make Moses the most powerful and feared man on the East Coast. To escape his cruelty, she faked her own death and started a new life as Alice Worth. As a private investigator specializing in cases involving the supernatural, Alice walks a precarious line between atoning for the sins of her grandfather’s cabal and keeping her true identity hidden.

Hired to investigate the disappearance of a mysterious object of power, Alice enlists the help of Malcolm, a ghost running from a past as nightmarish as her own. It soon becomes clear the missing object was taken by someone with a dangerous secret and an unknown agenda. When her client is kidnapped, Alice must find her and the object of power before a vengeful killer destroys the city and slaughters thousands—starting with Alice.

HEART OF FIRE (Book 2)
It has been a rough month for mage private investigator Alice Worth.

Alice hasn’t had a decent night’s sleep in weeks, her relationship with werewolf Sean Maclin is on the rocks, a federal agent hounds her every step, and a powerful vampire whose ulterior motives have ulterior motives watches her every move. It’s enough to drive any woman to drink.

Just when Alice's ghost sidekick Malcolm is about to stage an intervention, her former employer, Mark Dunlap, enlists her help to find out who’s been kidnapping women off the streets. As the list of the missing grows, the city’s anger turns against the vampires, and the Vampire Court hires Mark and Alice to find those responsible. After the case reunites her with Sean, Alice is forced to confront painful demons from her past, as well as the very real demon who wants her dead and the vampire determined to control her power.

HEART OF ICE (Book 3)
Even the coldest hearts can burn...

After closing a big case for the Vampire Court, mage private investigator Alice Worth is relieved to be back solving magical mysteries with her ghost sidekick Malcolm and spending quality time with sexy alpha werewolf Sean. Her latest case puts her on the trail of a burglary ring targeting wealthy collectors of magical objects. Meanwhile, Alice’s grandfather, crime lord Moses Murphy, fights a local boss for control of the city. Soon a new danger emerges: Moses’s new lieutenant is someone Alice knows and this is one family reunion she wants to avoid at all costs.


In two hundred years, Charles has never met anyone quite like Alice. Minutes after meeting him for the first time, she threatens to burn down Vampire Court headquarters. By the end of the night, Charles is sure of two things: Alice is not who or what she seems, and someday she will be his...if she doesn't get herself killed first.

I am going to fangirl all over this blog post so if that bothers you, just read a different post.

A couple weeks ago, my favorite publisher, City Owl Press, had a bunch of box sets free on Amazon. I just had to grab them. Who doesn't need more free books?

Anyway, this was the first time I have read anything by Lisa Edmonds. I must say Holy Cow! These stories just blew my socks off.

Alice Worth is Mage PI who tries to solve problems for her  clients all the while trying to protect her secrets from the people who would do her harm. She is not sure that she can trust anyone and keeps everyone at arm's length. Until one day, Malcolm the ghost is assigned to her. Now she is not a one man show, she has to adapt to working with a companion. That's when all the action starts to happen.

Now, let me tell you why I love this series. I love Alice Worth. As an MC, she is nearly perfect. She has an incredible backstory that Edmonds weaves throughout the series. Every little piece of backstory is tantalizing. She is a total badass. She moved across the country, had a total makeover, and started a new life to hide from the horror of her past. As a mage, she has lots of really cool powers. She has a green fire whip that she uses to take out the bad guys. She is flawed but always tries to make up for transgressions in the past. I love how broken she is, but she is trying her hardest to heal.

I also enjoy the other characters. Malcolm the ghost is funny and a nice balance to Alice's personality. Charles the vampire is so cold and calculating. I love how he is also damaged goods, but he definitely seems to have feelings to Alice. Then there is Sean the werewolf, he is just hot and so sweet.  Edmonds has all the characters to make a great story.

There is ton of nail biting action that kept me turning the pages through the wee hours of the night. Some was unexpected and some was predictable, but I enjoyed the plots of all the books.

I would definitely recommend reading them in order as it may be difficult to follow the action.


This was a refreshing read that has wonderful characters, lots of action and danger, and just a bit of romance. This series has moved to list of faves. Can't wait for the next book!
- June 13, 2019