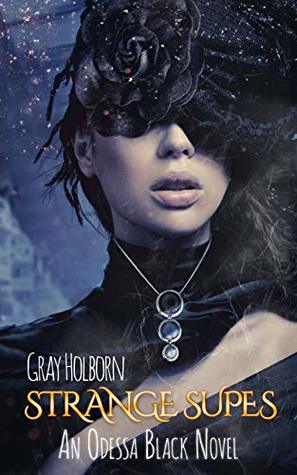 In Odessa's world, supernaturals are divided into two categories: energy feeders and energy manipulators. They exist among humans, but mostly stick to their realm in the Veil. Or at least they used to.

While Odessa has no power herself, beyond the unexplainable and seemingly useless ability to identify others who do, she lives happily and chaotically with two manipulators who are perfectly fine with existing on the fringe of their world. More than happy with her outsider glimpse into Veil life, Odessa wants nothing more than to hangout with her friends, finish her degree, and figure out what exactly she wants to do with the rest of her life.

But her plans are disrupted by the arrival of several new supes in town who seem hell-bent on turning everything in her life upside down. Between Jax, the irresistible seduction-feeder who has no interest in leaving her alone and Soren, the surly supe who wants nothing more than to push her away, Odessa's ties to everything she thought she knew are challenged. As she gets dragged further into the world of supernaturals than she ever wanted to go, she discovers that the people she surrounded herself with aren't exactly who she thought they were.

🐾🐾🐾🐾🐾
I absolutely adore this story. It is about a strong senior in college just trying to make it through. She has a gift that she can see Supernaturals' powers, but it isn't useful with just her best friend Ellie and Uncle Sam. That is until Ellie's brother stops by to provide protection detail to Ellie. When the activity level of the supes in Seattle starts to increase, they begin to wonder if everything is as it seems. This just starts the rollercoaster  of adventures that Odessa and her friends embark on.
This story has a lot of hot men. I mean alot! You can just pick which type you like. The huggable teddy bear, super flirty sweetheart, the dangerous dark and brooding type, or the wild card. I can see Odessa falling for a couple but my fave is the wild card, Micheal.
Unfortunately, it ends on a cliffhanger. Please write more Gray! Pretty please!!
- April 04, 2019