Welcome back to the Summer Bookish Blog hop!
This is a blog hop organized by the wonderful
Jo Linsdell for the Facebook group: Bookish Blog Hops. 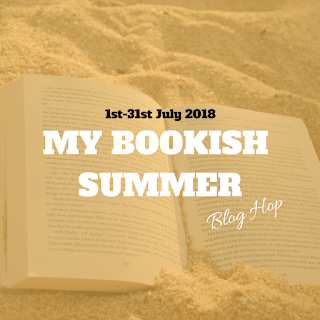 Leslie Conzatti www.upstreamwriter.blogspot.com
Oh man there are SO MANY! If you’re wanting something you can easily pick up from the library, may I suggest The Princess Bride by William Goldman, The Lunar Chronicles by Marissa Meyer, The Hollow Earth Trilogy by John and Carol E. Barrowman (Yes… that John Barrowman!), or basically anything by Cornelia Funke for an exciting, fun, light read! If, on the other hand, you are interested in supporting indie authors, I would definitely suggest The Fair Folk Chronicles by Jeffrey Cook and Katherine Perkins for a great mythology-based series; Kelly Blanchard’s Chronicles of Lorrek series seamlessly blends cyberpunk technology and fantasy magic in a rich and intriguing world; or, if you’re more into historical fiction, Jeffrey Cook’s Dawn of Steam trilogy is utterly fantastic and breathtakingly beautiful; if you’re a fan of Jim Butcher’s Dresden Files, then definitely try out The Grave Report series by R. R. Virdi for a unique twist on the paranormal investigator trope, with a heap of sass on the side! Between all of those, I think you’d have your summer pretty much sorted!

Jo Linsdell www.JoLinsdell.com
There are so many great summer reads it’s hard to pick so I’m going to share two from my shelves. Tuscany for Beginners by Imogen Edwards-Jones and Cat by Freya North.
Let’s start with Tuscany for Beginners.
Oh, the dream of escaping to Italy–and the nightmare of reality. . . .
Belinda Smith has found her very own Tuscan valley in the sun, having abandoned a dreary cheating husband and an even drearier English town. Running Casa Mia, her own too, too divine bed and breakfast, everything is coming up sunflowers and olive groves for La Contessa of the Valley. Life couldn’t be more perfecto!
Until, that is, the arrival of Lauren–a beautiful, feisty Wall Street ball-breaker who has the gall to announce her plans to open a new B&B. A place just like Belinda’s–only much more glamorous. Even worse, Lauren, whose charmingly calculated smile Belinda recognizes as quite like her own, threatens Belinda’s existence as the epicenter of all things ex-patriot in the valley.
Have Belinda’s fabulous days of ruling supreme in this corner of the world come to an end? Will the carnivorous Lauren consume Belinda’s dreams al fresco? Will Lauren’s gorgeous son Kyle steal Belinda’s lovely, overworked daughter away from home and hearth (who will do the cleaning, for God’s sake?). War has come to lovely Tuscany–let the fur and focaccia fly!
And now for Cat by Freya North
Catriona McCabe, 28, only ever known as Cat, is trying to improve her career as a sports journalist and get over a failed relationship. What better way to do both than to spend the summer following the Tour de France?

Casia Schreyerwww.casiaschreyer.wordpress.com
Calliope and the Sea Serpent by Alex McGilvery - a lovely steampunk, coming of age adventure where artist Calliope accompanies her scientist father on an exploration voyage as the official artist/recorder. Along the way she discovers her true passion.

Marcia Marques TrendySimpleLife.com
We Were Liars by E Lockhart is a perfect summer read in my opinion.  I could not put this book down and read it in 2 seatings (mainly because I needed a few hours of sleep).  Here’s a little bit about it…
A beautiful and distinguished family.
A private island.
A brilliant, damaged girl; a passionate, political boy.
A group of four friends—the Liars—whose friendship turns destructive.
A revolution. An accident. A secret.
Lies upon lies.
True love.
The truth.
- July 24, 2018