With the help of her gutsy friends, fun-loving city girl Tara Warr is the only victim to survive David Howard’s death list. Whilst lounging in prison the hypnotic sexual tour de force enlists an eager recruit, seduces a prison warden and relocates to the sunnier climes of Mexico, a freedom short-lived when his charred remains are found in the fire of a plastic surgeon’s clinic. The police cease their search, finally Tara and her friends can relax, David is dead.

Laughter soon turns to fear when he communicates via Tara’s laptop that he is very much alive, knows their every move and is ready to finish what he started. He is among them, but who? He has a brand new face.
Tara has had enough, time to turn the tables and make him suffer.  A woman unafraid of death is a dangerous thing. Has David finally met his match?

*Unfinished Business* is the second book in the David trilogy.
It is a suspenseful ride from beginning to end. I was drawn in from the start and couldn't put it down. It picks up right where the first book leaves off. So please read that one first! We get to watch Tara battle his demons and David continue on his obsession with her.
The story is well written and the plot is as twisty as a mountain road. I thought I had it figured out and then BAM something totally unexpected happened. As with the first story, it is descriptive and shocking. It was so good!!! 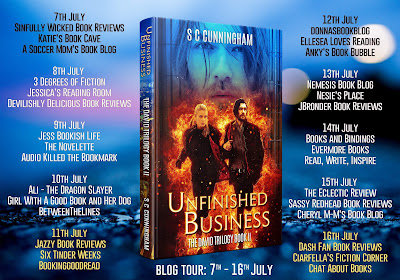 Crime Investigator & Author S C Cunningham
Unfinished Business (Book II of The David Trilogy)
My Research.
As with many Authors being observational and asking ‘why?’ is my main research source.

For story-line research I tend to write what I know. In the main, my fictional plots are based on real life experiences. Luckily I’ve had a hectic ‘accidental’ life - working in fascinating industries with interesting people, and surviving a few dramatic scenarios.

For character research I draw on a mix of the traits of people I know or have closely observed. It’s easier to write from truth, and I’m lazy.

For finer detailed research, ie blood splatter, gun calibre, psychotic behavioural patterns, I read up as I go along (my google history reads as a crime scene), whilst trying not to get too bogged down with detail as it kills flow.

My personal life-experience research is as follows – am British born of Irish parents, was plonked from the age of 8yrs into an Irish Catholic nuns boarding school for 8yrs, and then on to college. After a short spell of studying law (frustrated at the lack of justice in our systems) I went on to work as a fashion model, married a rock musician and we ran a music to film production company in London for 8 yrs (lots of 8’s in my life!).

Divorced, and then as a single mum worked within football, sports celebrity management, horseracing/tennis/golfing events, children’s charities, and more recently for the Police as a Crime Investigator – Intel Analyst, Major Crime Team, Wanted and Absconder Units.  Oh yes, and somewhere in there I got drunk and married (again) in Vegas, which lasted about 8 months.

Am proud mum to a wonderful Artist daughter and owned by three dogs.

For the past ten years I’ve been drawing on this natural research source to write steamy psychological thrillers The David Trilogy and gritty paranormal thrillers The Fallen Angel Series.

The David Trilogy was kick-started by an incident that happened to me in my twenties when I was living in London. Quite frighteningly and out of the blue, I crossed paths with a prolific violent serial attacker who targeted single girls living alone in basement flats in Notting Hill and Olympia. It was then that I realised that evil can sit around any corner - learn to trust your gut.

This male haunted London for a long period of time; he was astute, studied his victims for days and avoided capture. I believe he attacked 14 or so women, luckily I got away unscathed (must have an Angel looking out for me) and managed to help Police ID him with a photo fit. He was a nice looking, well dressed, calm, cold, precise and unhurried. He didn’t say a word, just stared, seeming to revel in the fear he instilled.

I remember looking into his face and asking why? I needed to understand how a human could be that cruel to another. He had the look of a spoilt mother’s boy; I guessed his mother must have loved him at some stage, but what life changing event had turned him from a sweet little boy into an evil adult? The seed for complex protagonist David Howard was sown.

Using a mix of my own experiences (boarding schools, models, the press, celebrity management, footballers, London haunts and fun loving friends) and further study into the psychotic mind, I created David’s fictional world which shines a light on the ripple effect carnage the misuse of power, religion and passion can cause.

The book has been adapted to film script, so we may see David on our screens one day. I loved working on his character so much that I’ve dragged him into The Fallen Angel Series where he causes further chaos in the skies.

The research for the paranormal Fallen Angel Series was based on a kidnap incident I experienced as a child. At 3 or 4 years old I was taken and got away (that Angel again!). The following week another little girl was taken, she didn’t get away. I remember being upset that the nasty man had got away, and said my prayers every night, asking God for a deal – That if I was a good girl, when I die, would he let me sit on a cloud for a while, invisible, and help him get the baddies that slip through his fingers? This wish has stayed with me throughout life, I tend to find myself supporting the underdog, and looking for justice.

The research for this series is my childhood experience, mixed with crime knowledge and the empowering thought that we’re not alone. I’ve created a raw fictional fantasy where vigilante Angels dish out tough karma from the skies, protecting the underdog and sorting out the baddies. It’s fun, the angels are feisty, naughty and brave, their work is contemporary and thought provoking.

I guess, in a nutshell, my research has been my life.

Pleased be warned, The David Trilogy is a sexy thriller, think Psycho meets 50 Shades. It can be a little naughty at times and may not be for everyone. But if you’re brave enough, grab a glass of vino, close the bedroom door and read alone.

Thank you, and remember to follow that gut of yours, it’s the strongest tool in the box.

The David Trilogy – The Penance List, Unfinished Business, For My Sins (in progress).

The Fallen Angel Series – The Deal, Karma (in progress).
About The Author 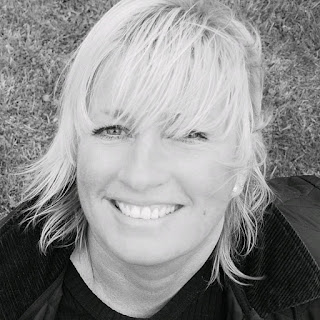 British Author S C Cunningham (The Penance List, Unfinished Business and The Deal) creates psychological and paranormal thrillers with a skilled mix of fueled tension, dark humor, and pulsating sex scenes. Her works offer a fresh level of sincerity and authority, rare in fiction.
Cunningham writes what she knows. Abducted as a child, she survived; and every night for months afterward, she prayed to God, asking for a deal. This personal journey sparked the fuse behind the intriguing and riveting fictional world she portrays in The Deal, the first in the Fallen Angel Series. Twenty years later she crossed paths with a violent serial attacker, thus sowing the seed for her thrillers The Penance List and Unfinished Business part of The David Trilogy. She is currently working on Book III For My Sins.
An ex-model, British born of Irish roots, she married a rock musician and has worked in the exciting worlds of rock music, film, sports celebrity management and as a Crime Investigator for the Police – Wanted & Absconder Unit, Intelligence Analyst, Major Crime Team, Investigations Hub.
Having worked in the music to film industry, she writes with film in mind. The Penance List has been adapted to film screenplay.

*Terms and Conditions –Worldwide entries welcome.  Please enter using the Rafflecopter box below.  The winner will be selected at random via Rafflecopter from all valid entries and will be notified by Twitter and/or email. If no response is received within 7 days then I reserve the right to select an alternative winner. Open to all entrants aged 18 or over.  Any personal data given as part of the competition entry is used for this purpose only and will not be shared with third parties, with the exception of the winners’ information. This will passed to the giveaway organiser and used only for fulfilment of the prize, after which time I will delete the data.  I am not responsible for despatch or delivery of the prize.