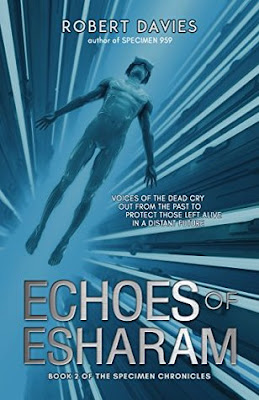 Book Blurb from Goodreads:
He only wanted to go home, but first he must save humanity. . .
Delivered at last from the hell that was Bera Nima prison, Darrien Norris basks in a freedom he thought would never arrive. But as he waits for the Transceptor to restore his memories from seventeen years before, he discovers an alien race intent on destroying everything, and everyone, in its path.
Now Norris and his friends must devise a plan in a desperate mission to prevent a galactic catastrophe. Will they succeed? Or will humanity cease to exist—forever.
GOODREADS
AMAZON
Book Review:
Thank you to BHC press and the author for gifting me with an eARC. I received this book through LibraryThing’s Early Reviewers program.
Check out my review of Specimen 959 as this is a sequel.
Again Robert Davies crafts a beautiful complex story as the reader follows human, Darrien Norris, as he navigates his way around alien planets and back to Earth. This book picks up right where the Specimen 959 left off. I recommend reading them in order as the story continues to build. If you don’t, you will be lost.
What I love most about Robert Davies’ work, is that he is descriptive. I feel like I am there with Norris fighting the bad aliens, traveling on the hyperthread, and trying to save humanity. The world building that Davies does is wonderful, but it does take time to build up. This book is also a long one.
In the first book, there was a lot of action. In the second, Davies focuses on relationship dynamics. It is pretty awesome to watch Norris fall in love and see how that changes him and his significant other. Davies also shows how the different races of aliens interact and how all of humanity finally gets along. That would be awesome if some day there was no war on Earth and everyone lived peacefully.
I also enjoyed the way Davies used science and medical knowledge in the future. There is a section where one of the characters get infected with little machines that affect the way the cells replicate. The use of science in this section I found accurate, and I appreciate that with my medical background.
Overall, Davies did a wonderful job with the second story. Again, it is a long one and best enjoyed on a snowy day! It ended on a cliff hanger so the reader will have to check out the next one. To be honest, I enjoyed this one more than the first book.
It receives a 4 paw rating!
🐾🐾🐾🐾
- April 30, 2018