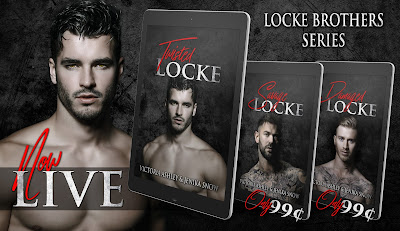 ACE LOCKE
Damaged.
Savage.
Twisted.
Those three words describe us Locke brothers to the motherfucking T.
We were wronged by the ones who were supposed to protect us. The ones who were supposed to love us … to show us how to love.
It doesn’t matter though. ‘Cause we taught ourselves how to love in the best way we know how. When it comes to giving our heart away, we do it with everything in us. We may be dangerous sons of bitches, but we love hard as shit.
Melissa doesn’t quite get that yet. But she will.
She got dragged into our fucked-up world, afraid and unsure of us.
Well, I’m about to change that.
I’m going to twist her up and shake the fucking innocence in her.
And by the time I’m through with her, she’s going to be my beautiful, twisted angel.
She’ll be mine and I’ll be hers.
I’ll make damned sure of that.
MELISSA ANDERSON
I was pulled into the Locke life when my roommate got involved with one of the dangerous brothers.
I should have left, should have minded my own business, but the attraction I feel for Ace is stronger than I can ignore.
I can feel the way he watches me. The ownership I feel from him, the possessiveness and obsession, lets me know he wants me too.
But common sense tells me I don’t want this in my life, don’t want to let a Locke brother mark me as his.
But that reality isn’t what my heart wants, isn’t what my body craves. Truth is I want to have Ace claim me, want his hands on me, his dominance showing me that all I want is to submit.
We may not lead the same lives, and he may have darkness in him, the likes of which I’ve never seen before, but for once in my life I want to skirt with that danger.
I want to forget everything else and just let Ace own every single part of me.
And I have a feeling he won’t stop until he does. 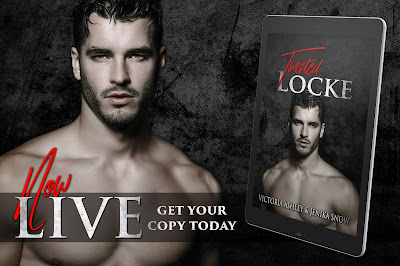 Disclaimer: I have not read the previous two books in the series.
I have conflicting  feelings about *Twisted Locke*. It's about a good girl, Melissa, trying to avoid bad boy, Ace, while he wants her.
I was excited to start reading this story. The characters were very colorful. I appreciated how they alternated between Melissa's and Ace's viewpoints. I felt like I got to know each character personally. They definitely spent more time developing Ace's person. He is THE bad boy. He curses, he smokes, and he hurts people. But, he only attacks people who the law can't touch. He has a good streak deep, deep, deep down. As a reader, it was hard not to like him even when I was appalled by his actions. I felt lukewarm to Melissa. She was so passive I had a hard time respecting her.
This story had a lot of violence and aggressive sex scenes. The authors did not skimp on the details. If you are looking for a great romance, this is not it. If you like domineering, animalistic sex scenes, you'll like this book. The book itself is short. I spent one evening reading it, so it's not a huge comitment.
Unfortunately like a mediocre first date, this book fell short for me. The plot was sketchy at best with the climax being weak or perhaps not there at all. I had questions about the backstory that never where answered. I felt disappointed when I got to the end and not much had happened.
Overall, this is not my kind of book. But that doesn't mean you won't like it. After all, lots of people like 50 Shades of Grey.
Thank you to the authors for giving me an ARC in exchange for my honest review.
Rating:✯✯✯
- February 16, 2018